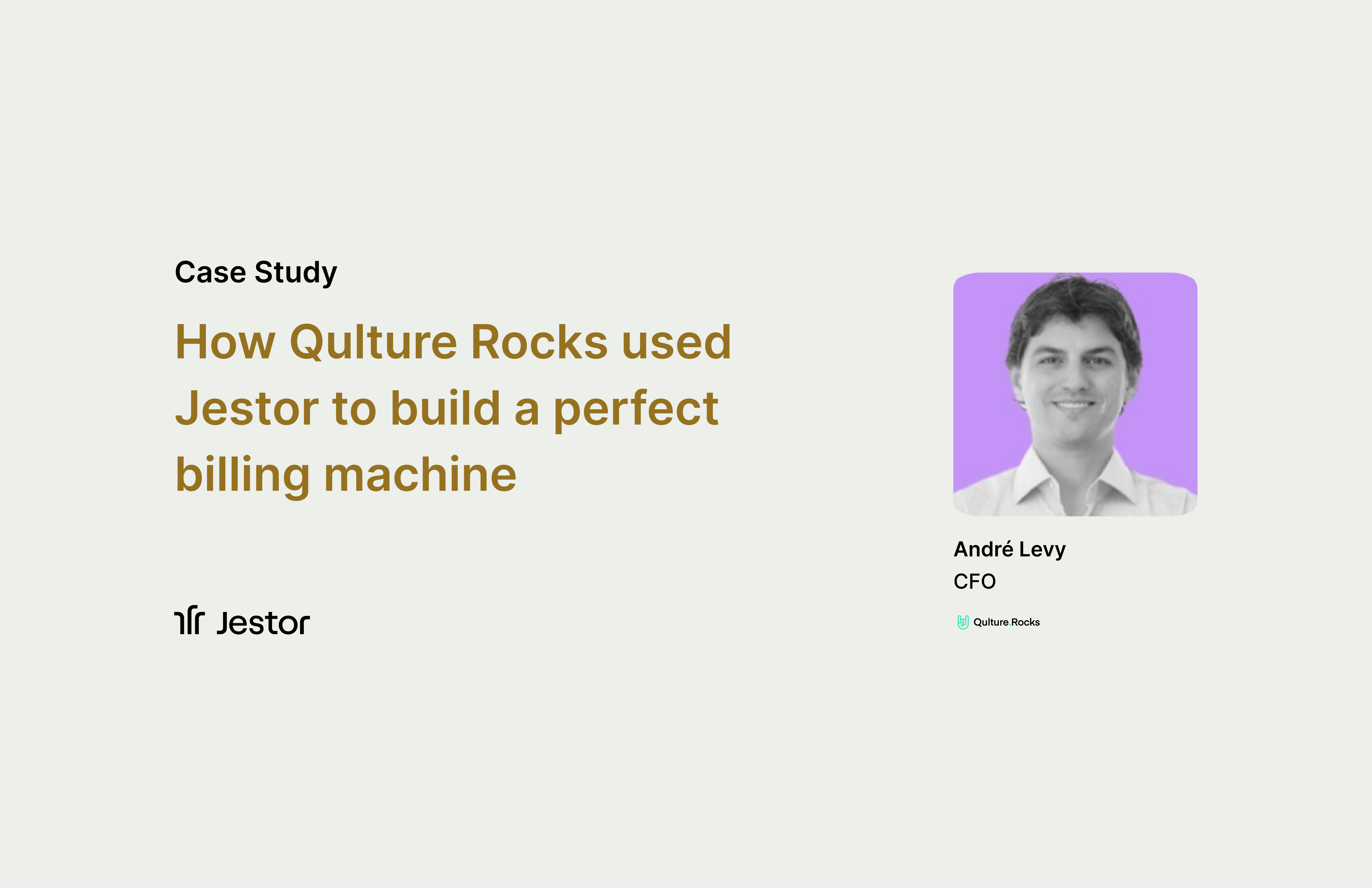 When offering solutions, Qulture Rocks’ sales team can offer different products and custom perks for their clients. This provides great customer experience, but nightmarish billing processes. That is, if they weren’t using Jestor.

From PTO to Billing, Jestor takes care of it all

Qulture Rocks’s first ambition was to automate billing, a task that, as you’ll read below, they excelled at. However, they are already expanding Jestor to include even more processes. While at first heavily dependent on Google Forms to relay information, Qulture Rocks is creating Jestor workflows to integrate sales to subscription data, feeding the aforementioned billing process.

That doesn’t mean only processes related to subscriptions and clients are being created inside Jestor. Internal processes, such as PTO planning, were created to ensure everything is running as smoothly as possible at all times, including what clients won’t see. All of this is done with auxiliary internal apps and approval rules to ensure everything is running exactly how it should.

As more processes are created inside their Jestor, things become more connected and actionable. Every new piece of data inside Jestor means more resources to automate and integrate things that were previously done manually. Improvements, then, become self-replicating: better processes lead to more time available, which they can use to create better processes.

“With our product, there are many different things that impact the invoice amount. Managing everything through spreadsheets got unsustainable, with a lot of small details going unnoticed—which means charging less than we should. Jestor’s automations solved this issue to the point we’re not only saving time, but money too.”

Processes that leave no money behind

Qulture Rocks’s sales processes can result in a wide array of different specifications. While selling subscriptions to software is usually a rather standard affair, there are a lot of customizations that can be discussed when closing a deal with a client. This, in turn, impacts not only how much a client will be billed, but also how this amount will be calculated.

There are also some other more bureaucratic differences Qulture Rocks has to deal with as well. Being a company with overseas operations, payment methods and tax laws also change from client to client.

This combination of flexibility and international expansion led to complicated processes that involved reading through previous agreements and complex spreadsheets every month just to know how much they should bill each client. While they had managed to keep things in order up until that point, a rapidly growing operation meant it was getting harder to keep track of all contracts, and errors could start costing them money.

Of course, Qulture Rocks had already mapped out these issues. They researched and tried traditional financial platforms and ERPs, but off-the-shelf software could not solve what they needed. They also had more than enough expertise to design a solution, but they lacked a way of easily building what they envisioned without taxing their tech team, which was dedicated to their core product.

Turns out, Jestor was just the perfect way to do it.

Dealing with exceptions: from headache to delight

The main challenge around building a billing process for Qulture Rocks was finding a solution that could encompass the many different rules they had currently in place. From scheduled adjustments to split charges, no standard finance platform could solve 100% of their needs.

Tax complexity slowing things down
Taxes and payment methods in different countries or states demanded full attention and manual treatment, which could lead to errors and delay in payments.

Sorting through spreadsheets
Every single feature or custom deal had to be manually fetched when calculating the correct invoice amount, which was time-consuming and bound for human error. . Also, whether an agreement was about to expire or a client shouldn’t be billed for three months, it was up to the billing team to keep an eye on the spreadsheet and detect it.

Invoicing mistakes wasting time
Sending an invoice that doesn’t take into account local tax withholding laws could lead to a massive headache, so everything had to be done carefully and then laboriously double checked.

Instant billing, saving the CFO’s time
Jestor automatically detects the payment platforms and tax rules it should use for each client based on their subscription information. Leadership can spend less time double checking and explaining exceptions.

Scheduled invoices, contract renewals and adjustments
Events are automated. Subscription information is centralized in Jestor, and the team can set an automatic renewal date or adjustment, or even grace periods in which a client shouldn’t be charged. Instead of looking for information, Jestor takes an active approach to data and runs through everything automatically, creating accurate invoices and alerting the team to what should be done manually, such as renegotiating a contract.

Approving invoices with a single click
With their expertise transposed into automated rules, Qulture Rocks’s team now receives a list of every invoice calculated automatically by Jestor. All they have to do is confirm the information and click on a button. It’s that simple.

“I’ve used a lot of different dedicated finance platforms before, but they were never able to solve 100% of the problems they should. Spreadsheets were always present as workarounds, as ways to replace features that should have been there. Even something as simple as tax withholding could sometimes be a challenge on those platforms, or even impossible. The fact that Jestor so easily and quickly transformed into exactly what we designed is astonishing.”

Qulture Rocks could have decided to change their processes to fit into off-the-shelf solutions, but knew that would harm them in the long run. Their current method works, and gives them enough flexibility to grow fast while still giving their clients the best possible experience. Scaling up should be about optimizing successful strategies, not abandoning them.

By using Jestor, they were able to create a tool that doesn’t change their way of doing things, but instead allows them to do it better and faster. And, should they change their processes for even better ones in the future, Jestor can adapt just as easily to help them. It doesn’t matter if things become simpler or more complex: they have the flexibility and freedom to embrace it.