How Quarto à Vista increased operational efficiency by 250% with Jestor 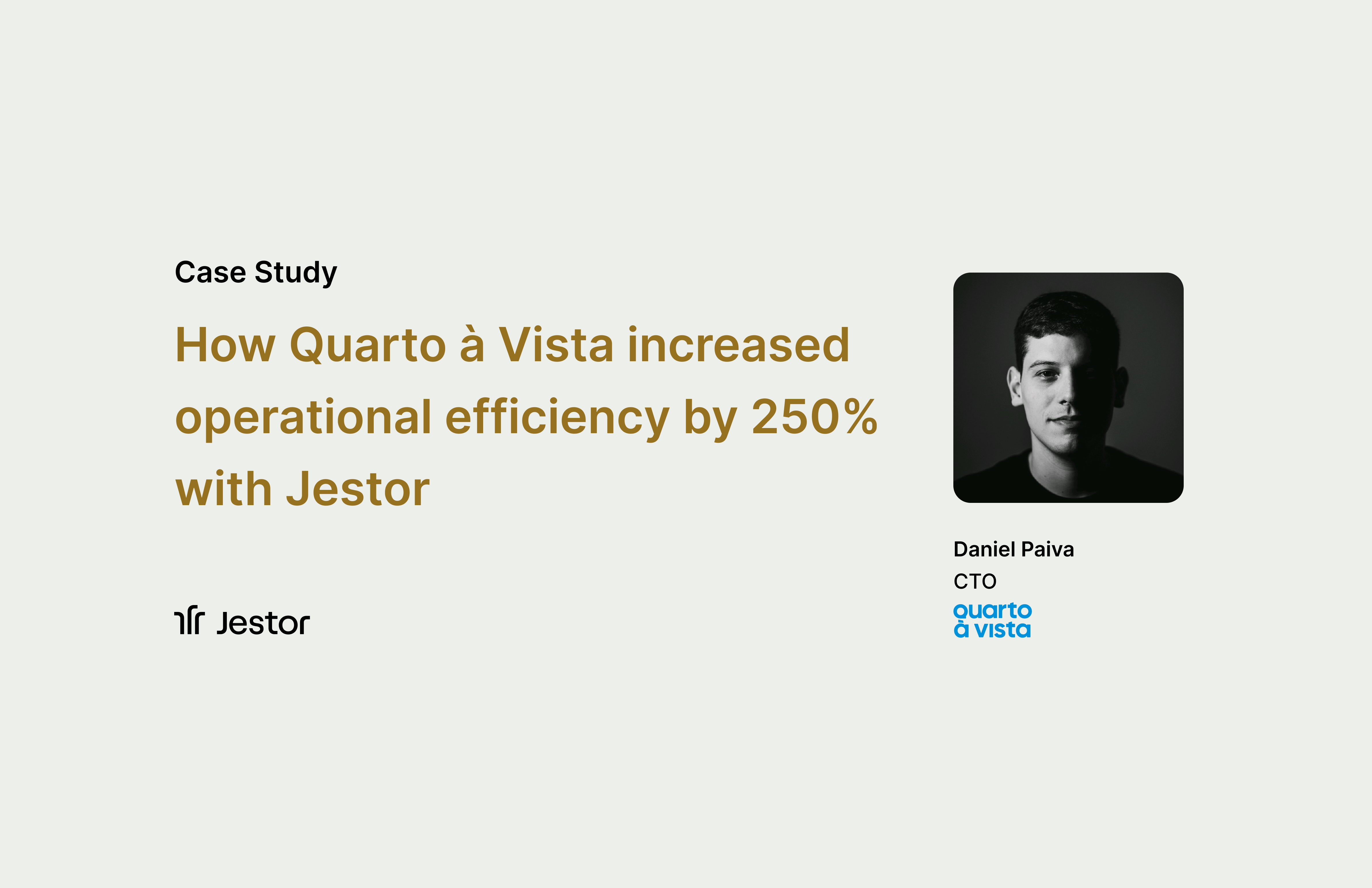 Even using a whole array of different tools, most of Quarto à Vista’s tasks were still performed manually. With a fast growth pace and an increasingly complex operation, Quarto à Vista turned to Jestor to automate internal processes and scale without limitations.

At least 2.5x more efficient
each individual team member is able to manage 2.5x more properties (from 20 to 50) with an even better quality of service.

Quarto à Vista is a Proptech that provides stress-free rentability for property owners. By managing everything from reservations to upkeep and maintenance, Quarto à Vista ensures their clients can effectively scale up their own investments while still providing a delightful experience for guests.

With a growing number of properties managed and guest reservations, Quarto à Vista had a problem in their hands. While ecstatic about the company’s success, it was becoming increasingly obvious that the current combination of different software they were using just wouldn’t be able to support their current growth rate.

In fact, they had trouble in more than one front:

The big problem, however, is that none of the software they usd played nicely with their Property Management System. This means guest reservations had to be extracted, then treated and uploaded to the different tools many times a day, entirely by hand.

Quarto à Vista knew that at their current pace they would inevitably be held back by the solutions they were using, but not one tool or combination of tools they had previously tested had been able to bridge the gap between all of their processes.

For that, they’d need something that was not only powerful, but extremely flexible. That’s where Jestor comes in.

”Jestor eliminates all the dull manual tasks, so our team can focus on providing the best experience. Everything is handled by the platform so the actual human interaction is more about value than anything else.”

Quarto à Vista started out by solving one of their biggest pain points right away: getting reservations into Jestor automatically.

None of the software they were using, which ranged from Trello to Pipe and Asana, had an easy way of doing this. Mostly, they lacked an easy way to receive and treat data in the way they needed.

In Jestor, however, this was no problem at all. By using a combination of webhooks and a bit of low-code, they were able to get new reservations in real-time automatically.

This meant that a huge and stressful part of their process, which was extracting reservations in a timely manner, was now performing entirely on its own.

With this information now inside Jestor, they could get to automating and perfecting their operational workflow.

On their end, they can now keep track of every reservation, which are seen as cards in a Kanban and advance automatically depending on certain conditions (such as check-in date). Also, apps and dashboards gave them a strategic overview they didn’t have before.

On the guests’s side, bureaucratic and menial tasks were automated as well. Guests receive confirmation messages automatically, as well as forms that update their reservation’s kanban card automatically when submitted.

All these upgrades and automations take a lot of friction out of the process, which is not only good from an internal point of view: customers are happier too!

Extract and upload
Getting information out of one system and into the other involved downloading spreadsheets, treating them, and uploading them manually.

Losing time and energy
Client-facing team members had to do a lot of manual tasks before even providing the actual service to clients, driving efficiency down and leading to operational fatigue.

Information silos
With each team using a different tool, sharing information between processes was nearly impossible. Automations were a limited resource, and teams could be in the dark regarding different processes.

Everything’s connected
Reservations are created in Jestor automatically, and Jestor acts as a central hub that connects and automates all the necessary software.

Focus on excellence
Everything that can be automated is automated. Team members can focus on providing the best service, solving problems, and bringing more value to both the client and the company.

Single source of truth
With all processes inside Jestor, it’s possible to see everything that is happening regarding a reservation or property with just one click. Information is shared, not hidden, and automating processes is the norm.

TLDR: By using Jestor as the central hub for their operations, Quarto à Vista was able to create a single, unified workflow that keeps their company running like clockwork.

“With Jestor, our main automation creators are not in our tech team, but in our operations staff. They have gained the freedom to build processes without depending on developers, who in turn can now help as accelerators without having to build things from the ground up.”

Quarto à Vista believes that one of the main benefits of Jestor is that it’s not an off-the-shelf solution, but effectively a tool that empowers anyone to take the lead and improve processes.

With all the information in Jestor, employees can create workflows and automations to help them with any sort of task. After having the reservations workflow brought in, team members started to gradually bring more and more processes to Jestor. For example, maintenance tickets can now be submitted by anyone–employee, guest, or property owner–and be acted upon in custom workflows with full visibility.

Because Jestor is a relational database, the more processes are brought into Jestor, the better it works. That’s because a team member is never more than a few clicks away from knowing a request’s status, reservation dates, or even the information on cleaning checklists. All of this is connected and built with the platform’s no-code capabilities.

That’s not to say Jestor isn’t also a tool for developers. With its low-code features, Jestor helps accelerate the creation of complex, unique solutions that have to be created through code. So whether we’re talking about custom pages or very intricate automations, developers can also contribute better and faster than before.

In Quarto à Vista’s case, while they do have an engineering team, they cannot fully dedicate them to building internal processes. The fact that other team members can build most of the structures and automations helps the engineering team focus and only step in when necessary, keeping their team structure highly optimized.

Not only that, but Jestor can act as a project accelerator as well: the engineering team can design their projects with Jestor in mind, which can cut a lot of steps (such as creating and hosting databases) and help them save time and money. Using this blend of no-code and low-code allows the whole company to keep their focus on efficiency at all times.

Whereas before teams were more isolated and had fewer resources to work with, they are now more collaborative and powerful than they ever were.

Quarto à Vista is growing at an accelerated pace, and focusing on providing the best possible experience for guests. To keep rentability high, processes will have to keep evolving with efficiency in mind. For this to happen, they know that automations and connected information are going to be key.

Jestor provides them with a tool that not only empowers anyone in the company to be a process builder, but can adapt to any sort of process, even completely new ones. Whether they’ll have to create, change, or even stop ongoing processes and start from scratch, Jestor is a tool that can adapt to whatever necessities arise.

Instead of searching for tools that do at least some of what they need, they can now just build it themselves.

With Jestor, Quarto à Vista can finally be as excellent as they really are, and not just as good as other tools allow them to be.