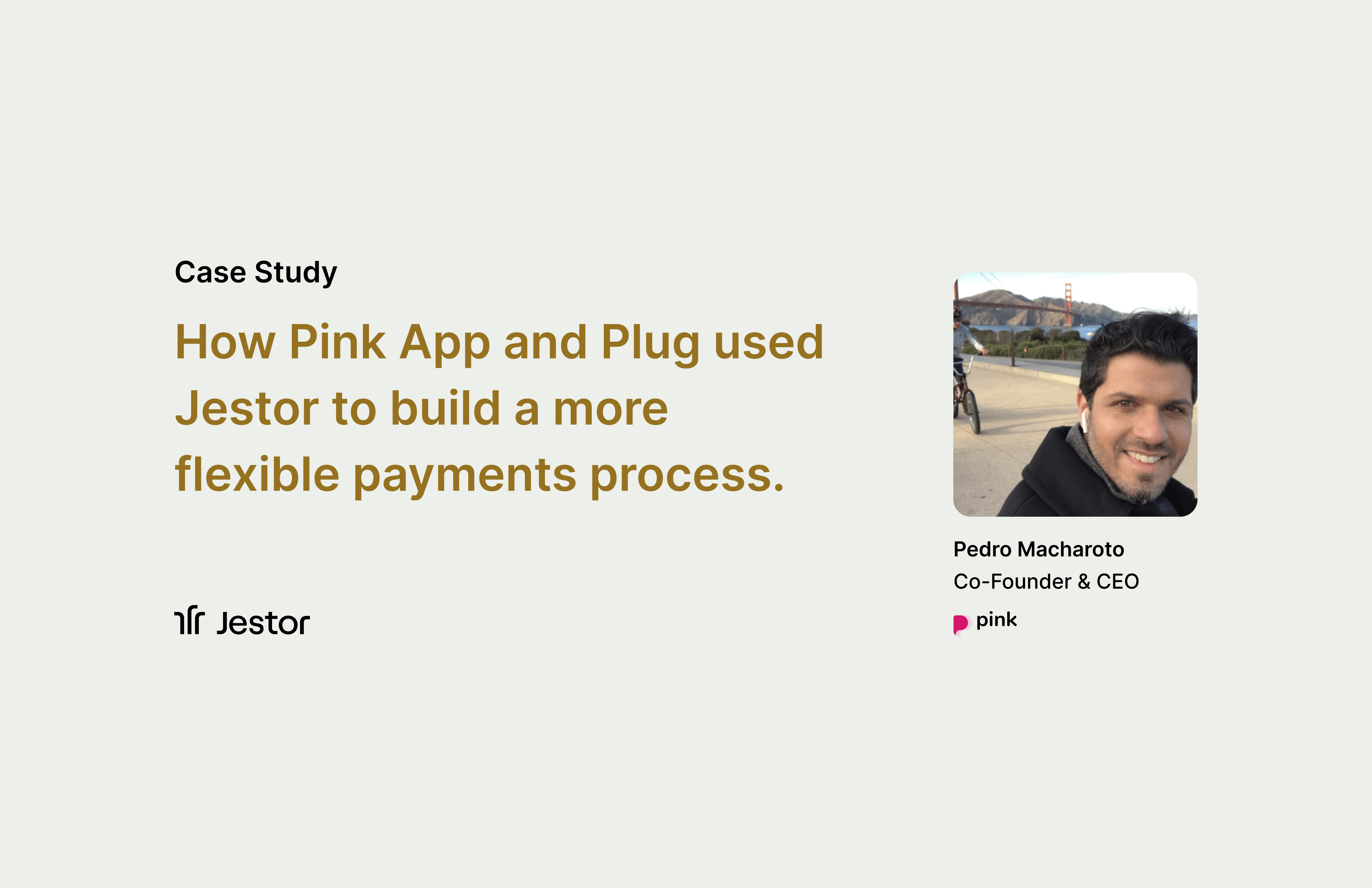 Integrating payments platforms can be quite a chore. Pink App decided to use Jestor and Plug to simplify the process of integrating and automating—and ended up building something even more powerful than a direct integration.

Pink App is a technology company whose solution for WhatsApp Business enables support teams to manage conversations and requests between agents through a single platform.

Plug is a single API to connect to and route between payment providers.

Pink App’s team wasn’t entirely thrilled when choosing a payment platform for their services.
While standard providers worked well and offered a decent array of nifty features, they couldn’t help but notice a couple of problems across all players:

For the latter problem, Pink App found a great partner in Plug.
Connected to all the major payment platforms in Brazil, Plug made it easy for Pink App to work with the provider of their choice on a transaction to transaction basis while still retaining the ability to change in the future if they so desired. Everything is handled by Plug through a unified API, so adaptations are seamless and done without writing a line of code.

However, while Plug made connecting to payment platforms a breeze, Pink App still needed a way to manage subscriptions and plans with the specific set of rules they had designed. Not only should they be able to run recurring transactions, but also modify plans with custom items and integrate everything within their sales pipeline.

By uniting Plug’s centralized API with Jestor’s flexibility, Pink App was able to build exactly what they wanted

“It’s rare to get so excited about integrating payment solutions, but Plug and Jestor made the process of building everything an absolute delight. We were able to bring flexibility and efficiency to what is usually a pretty standard experience, and watch things run smoothly no matter how fast we grow.”

Pink App offers a wide array of services and custom items alongside their standard plans. While a ton of payment platforms do have some sort of subscription feature, they lack the flexibility to easily take in the rapid on-the-go changes Pink App’s sales team needed. Lack of automation, in this case, meant a lot of potential income just flying in the wind.

One of the ways to solve this problem would be by creating everything from the ground up, developing their own back-end solution. While at first this was what they intended to do, they soon realized this kind of approach uses up a lot of resources they just couldn’t spare at the moment. They needed a fast and reliable way to build what they needed without sacrificing other projects: and that’s when they found Jestor.

By using Jestor as an engine for their internal platform, Pink App managed to design processes in which their team could quickly add new products and services to a client’s subscription, and have that automatically reflected in the charged amount. They also gained the power to create new services and products directly through Jestor’s interface, setting the rules and pricing they needed, and have that work without having to change a single line of code.

Billing was an all-nighter endeavor
A good part of billing involved manual work, especially when a lot of customization was involved or when dealing with non-credit card transactions.

Hard to track complexity
As the product evolved, new features and items were created, and the number of clients kept growing, it became more and more difficult to keep track of all the changes to a client’s subscription.

Point of no return
Choosing a payment provider meant sticking with it for a long time, possibly forever. Any attempt to change would mean resetting transaction data, which could lead to accidental churns or delayed payments.

Billing is automatic and updated as deals are closed
Pink App designed a subscription management system in which items can be added or subtracted to clients, discounts can be easily applied, subscriptions can be tiered by features—and everything is automatically taken into account when charging a customer. Transactions also run automatically in customizable periods.

Flexibility without hassle
Everything is done through Jestor. Updates on subscriptions are centralized across teams, and Pink App’s Jestor naturally evolves alongside their own business model while still retaining ease of use to the end user.

Freedom to improve
Even though Pink App doesn’t keep any credit card data from their clients, they only need to keep Plug’s tokens to change between providers. They’re no longer locked-in to a single provider, and can benefitbetter alternatives to constantly improve.

TLDR: By integrating Plug and Jestor, Pink App managed to build the perfect custom platform. Even though it works on a complex set of rules, their payment process is now more flexible, reliable and automatic than ever before.

“Plug and Jestor are a perfect fit. Custom doesn’t have to mean complex. Jestor provides layers of customization and usability to transform business rules into flawless processes. We let companies work with the best payments provider and optimize transactions without writing extra code . If you want payments to bring results instead of headaches, I urge you to give this combination a try.”

Cofounder and CEO at Plug

While there are a lot of technical reasons for why Pink App chose Jestor, the bottom line for how it impacts daily routines is simply that Jestor creates ways for teams to work better together. By creating an integrated process for their Sales team, Pink App managed to make them an active part of the billing process, bridging the gap that usually exists between Sales and Finance operations.

More importantly, they were able to do so without creating breaches in each team’s responsibilities. By using Jestor customizable access levels, Pink App ensures the Sales team can help with fully automated processes, while still granting them access to no more data and workflows than necessary. This way, they can keep focused on doing what they do best and know no closed deal will get lost. In Jestor, teams are just as connected as they need to be..

Focus on the core product

Pink App is a tech company, and as such has a development team that could very well create an internal solution from the ground up. However, it wouldn’t make sense for them: building from scratch is costly, takes a long time, and worst of it all: deviates the tech team’s focus from improving and evolving their own product.

Jestor allowed them to create the best solution while saving time, money and internal resources. They were able to quickly solve a very complex problem in little time, not only eliminating operational headaches, but allowing them to stop wasting time on what’s not the core of their company and keep focusing on what is.

Pink App found in Jestor and Plug a means of developing the perfect internal platform: one that evolves easily and welcomes growth.