A new way to weigh: How Olga Ri ditched AppSheet and inventory spreadsheets for good 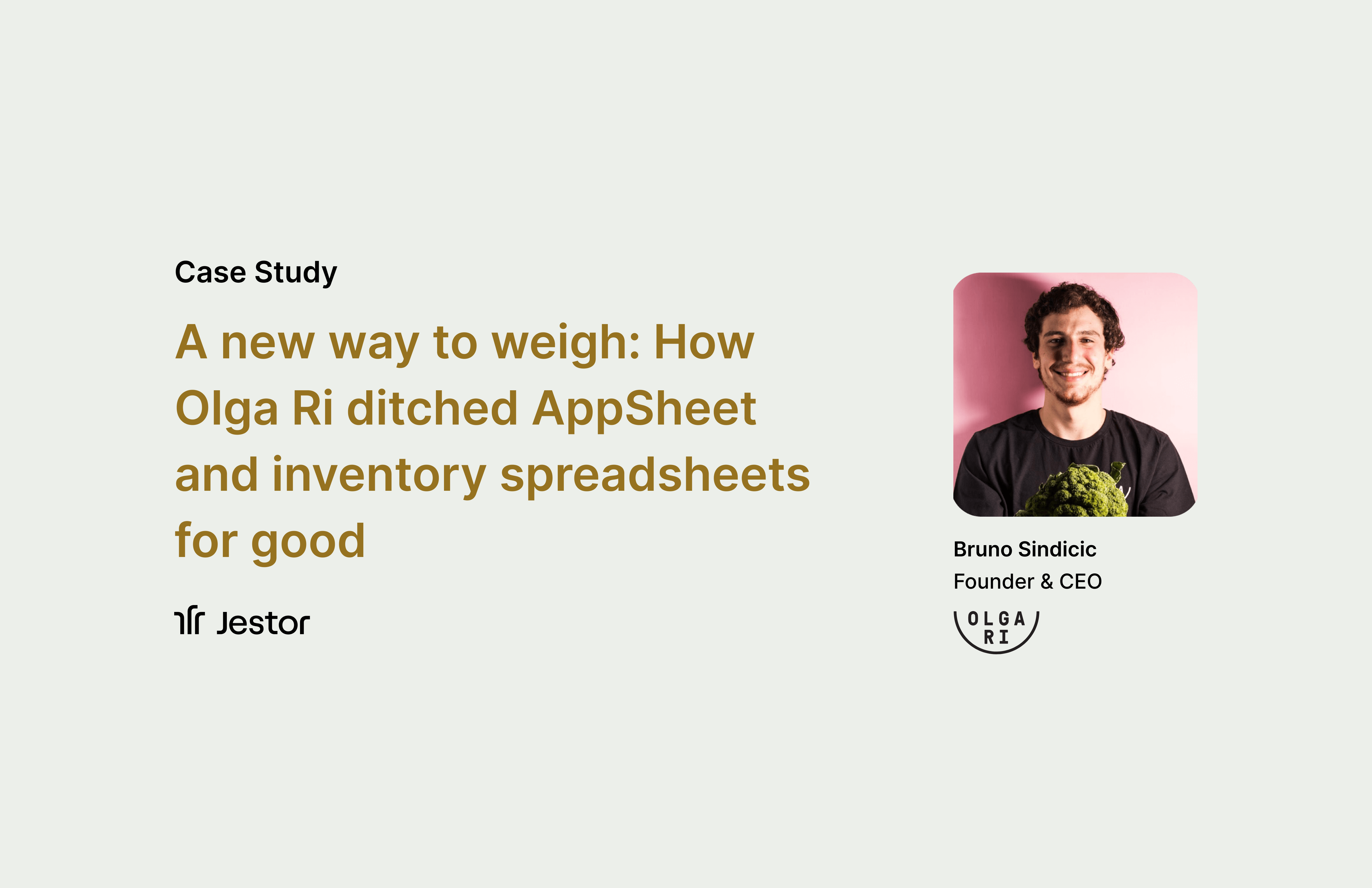 Olga Ri brings healthy food to thousands of customers with a fast, well-orchestrated operation. What’s not so fast? Writing down inventory numbers. That’s why they use Jestor to get accurate numbers automatically, as soon as they weigh their purchases.

Olga Ri is a fast growing foodtech that delivers salads and grain bowls, making it easier for their customers to keep healthy eating habits from the comfort of their own homes and offices.

They are the foodtech leader in Latam, funded by Kaszek and other top-tier investors.

Olga Ri’s team used to spend a lot of time treating data manually. While they were able to collect some inventory data with third-party apps, a large chunk of their data had to be manually extracted and imported to spreadsheets. And, as spreadsheet centered processes tend to be, a good portion of their time was dedicated to treating the data before being able to use it.

While this all was a very necessary step in their processes, they couldn’t help but feel it was a very archaic and cumbersome one, and that there should be a better way to get and process the information they need. When looking at traditional solutions, such as NetSuite, they also got the impression that, although helpful to some extent, it would also cement them into a framework that would not solve their problem entirely. Olga Ri’s team prides themselves in their creativity and tech-driven approach to problem solving, and knew there had to be a better way to create exactly what they needed.

And, with Jestor, there was.

Jestor provided a quick way of creating an app that pulled the data directly from the scale.

“When dealing with inventory, right and almost right are worlds apart. Products can spoil, and a shipment may not be delivered. Knowing the right numbers is what keeps the whole operation from going off the rails. For me, using Jestor and other software is exactly this: the difference between right and almost right.”

Where there’s API, there’s a way

The scale Olga Ri uses to weigh their inventory has an open API. That’s all it took for Jestor to connect and automate the entire process. Olga Ri knew that Jestor’s nocode and lowcode features were enough to create any application they needed, as long as it had access to the necessary information.

It didn’t stop there: this same flexibility allowed them to connect to other software whenever needed, effectively making Jestor the center player of the process, collecting and sending data to ensure things kept running smoothly.

Traditional inventory management
As tons of ingredients were brought in every day, every single input had become a spreadsheet row and treated so they had reliable numbers. Failure to do so could lead to understocking when underestimating quantities, or waste when overestimating.

Delayed insights
As data was not acquired in real-time, writing reports and creating dashboards always reflected past data. The difference between “are we running out of this product” to “we’re out of stock” was blurrier than they wanted to.

Tech where possible
Olga Ri was able to use third-party software to collect some data occasionally. For example, they built an app using AppSheet to register inventory output. However, this only made acquiring data easier: treating it was still as time consuming as ever.

Effortless accounting
Jestor pulls data directly from the scales, treats it, and updates inventory automatically. The team can rest assured that they will buy as much of an item as they should, making strategy more important than bookkeeping.

Reliable predictions
Custom apps and charts were created in Jestor to show precisely how much of an item they have in each branch. This allows them to have all their history easily accessible in a single place instead of chopped up in spreadsheets, as well as more able to respond to emergencies quicker and make more reliable estimates for purchases.

Tech in the real, physical world
Jestor permeates the entire process, allowing processes to be even more tech centered. A dedicated app was built inside Jestor to let team members insert additional manual inventory counting, triggering automations and adding a new level of reliability to the final quantities. This allowed Olga Ri to have better internal tools even outside of the office.

TLDR: Olga Ri created the next generation of fresh food kitchens by using Jestor to connect the process from scale to shipping.

“Even when you’re a startup, you get the impression that the only way forward is using traditional ERP like NetSuite, or maybe even hiring a software house to build something from the ground up. Either option is slow, costly, and never fully meets your expectations. Jestor gave us an alternative that not only felt more natural, it was also really the only way to get us quickly where we wanted to be.”

Founder and CEO at Olga Ri

The coolest thing about the way Olga Ri implemented Jestor: it didn’t just make life easier for people in the office, but brought a lot of improvements to field operations team members, where physical input is still necessary.

A custom app was created to help with the daily routine of counting inventory, providing warehouse workers with a quick list of the items they should count, and an easy way of inserting that information. Jestor then automatically compares the theoretical numbers with the real ones, providing actionable, valuable insights on efficiency and storage conditions.

”Now, all we have to do is weigh a product, and our inventory is automatically updated. Not having to write each quantity down between measurements makes things ten times quicker, and leaves no margin for error.”

A kitchen from app to app

Olga Ri’s experience with Jestor proves that even when you have physical elements to a process, it doesn’t mean it can’t be automated and integrated in some manner. While Jestor isn’t (yet) picking up items and weighing them by itself, it’s transforming this into ready-to-use data in real time, connecting the dots and making the process tighter with tech.

Also, Olga Ri knows that, no matter how much the process evolves, Jestor will be able to adapt and evolve with it, connecting to hardware or creating easy to use internal solutions where information can’t be collected automatically. If something can be done, it can be done better with Jestor.