How BT Créditos revolutionized their internal tool development with No-code 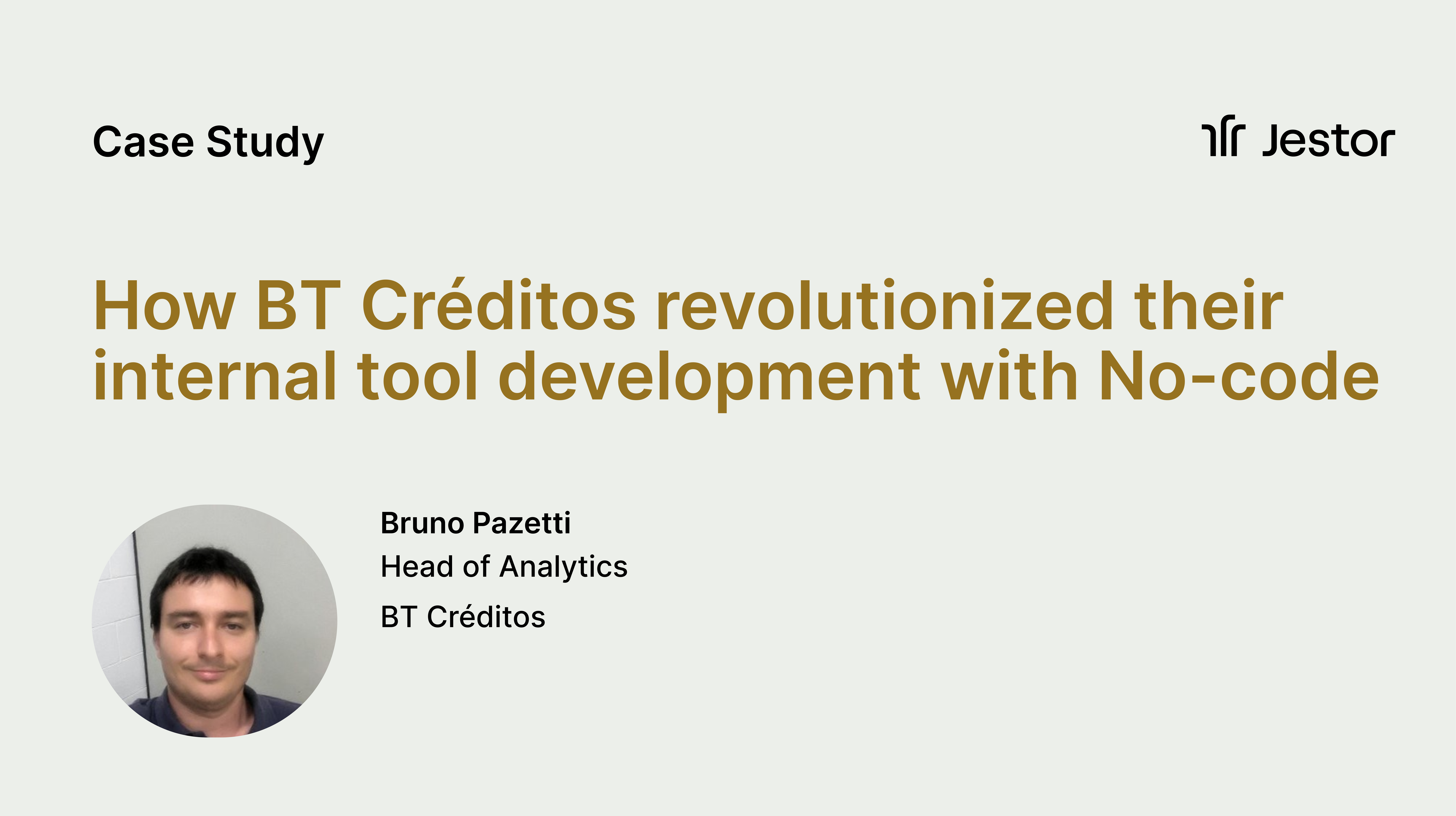 Expanding an internal system or coding one from the ground up is an extremely time-consuming endeavor. By choosing Jestor, BT Créditos is able to build complete internal solutions in just a few hours without using a single developer.

Number crunching: monthly analyses that took up to three days are now instantaneous.

Development: tools that would take up to three months to build were created in under three hours.

BT Créditos is a startup that allows people to sell the rights to possible damages awarded in lawsuits. Not only does this mean the person can guarantee a positive outcome to an otherwise uncertain suit, but effectively anticipate a resolution: a more than welcome alternative when an average lawsuit takes about 998 days in the Brazilian court system.

Much to their dismay, most of BT Créditos’s processes were still running on spreadsheets. They knew this was problematic, and had already taken some steps to optimize their workflows: for example, developing a custom internal system where they could run some of their key processes. After all, coding internal tools is not an uncommon solution for startups and tech-oriented companies.

But something about this also didn’t sit well with BT Créditos.

Because they understood technology and development cycles, one thing was abundantly clear to them: developing in-house can be costly, and extremely time consuming.

So they were faced with a dilemma. They could either:

Of course, there was a third option as well: explore no-code solutions that would allow them to channel their expertise and build their own internal tools without having to create all the infrastructure from the ground up. After some research, they decided to give Jestor a try.

And were blown away by how much they were able to do in just a few hours.

”I know how to code, and what that entails. I’m familiar to creating something from the ground up, and how long development cycles can be. Jestor is disruptive. It’s hundreds of times faster than traditional development. So much it’s dizzying at first.”

Head of Analytics at BT Créditos.

After testing out some of the features, BT Créditos realized that many of the things they needed to create efficient internal processes were already standard parts of Jestor: notifications, internal chats, and no-code automations being some of them. Creating their workflows was just a matter of combining Jestor’s prebuilt parts, something they could do in just a few clicks.

User friendliness was a critical factor not only to creating their solutions, but using them. They say old habits die hard, and that is almost always true when migrating to new software. However, any internal resistance faded away after a single day of usage. The operations team found using Jestor a delight.

Efficiency being the name of the game, a lot of things changed soon after Jestor was first implemented.

Number crunching nightmare
Processes on spreadsheets meant collecting and sanitizing data to calculate KPIs was slow and uncertain. Calculating some KPIs could take up to three days, only to be questioned by teams with differing information in their spreadsheets.


Changing was hard
Running things in spreadsheets and e-mails meant a lot of work relied on familiarity and muscle memory. Changing a process could cause a lot of mistakes before the team got used to the new way of doing things. Coding was a possibility, but one discouraged by long development cycles.


Low visibility
A lot of processes were done through hard to audit tools such as e-mails. This lack of managerial visibility meant some processes had organically grown in inefficient ways: duplicate same tasks were performed unknowingly, wasting valuable team members time.

Instant indicators
Because processes are run on Jestor, all relevant data is already in their database. KPIs are calculated automatically on apps and dashboards, and are always up to date. All teams have the same data to work with, which means they’re always sure the numbers are correct.

Full control
As everything is done in Jestor, reviewing processes to identify inefficient steps and points for improvement is as easy as following a pipeline from beginning to end. High visibility also encourages organic processes to grow efficiently, instead of inefficiently.

TLDR: Jestor allowed BT Créditos to not only recreate their internal processes more efficiently, but ensure that processes evolve efficiently instead of breaking down.

“Everyone’s happier. Operations gets an easier to use interface, and the relational database works much, much better for data-driven processes and analytics.”

Head of Analytics at BT Créditos.

One of the most valuable things Jestor did for BT Créditos is making life much easier for their team members. That can be summed up to two things: automating repetition and creating easy to use interfaces.

For example, the trigger for one of their processes was receiving an email. But sometimes not all information was sent at first, which sometimes meant a lot of back and forth before everything was ready for the next step. Even then, a good chunk of time was spent sanitizing and checking this information and then feeding it to spreadsheets. Now, the process starts with a custom form. Required fields ensure all necessary information is sent, and data is automatically stored correctly on the databases. Less time is wasted on checking, and more time is invested in acting.

Processes are automated, so e-mails, notifications, and records are created automatically when certain triggers are met. The team members are freed from executing repetitive menial tasks, and can focus more on doing things that are more interesting and engaging–and that generate more value to the company.

BT Créditos recognizes that there’s still a long road ahead. There’s a lot of room for improvement, both on optimizing processes they’ve already transposed to Jestor, as well as creating new processes as the company grows and evolves. One of their main aspirations is integrating their internal processes more and more with other tools, so they can use Jestor to optimize external-facing processes as well.

With Jestor, however, this long road is less of a problem and more of an exciting new venture. Creating new systems used to be thought of as a pain that would eventually have to be dealt with. Now, it’s another tool they have at their disposal that can help them adapt and overcome the challenges they’ll inevitably face as a growing company.

Now, innovating and adapting are not slow, costly projects that take months at a time: they are daily events that can come to life with a spark of creativity and a click of a button.