How Be My Guest built a perfect hospitality software, and increased its revenue by 10% 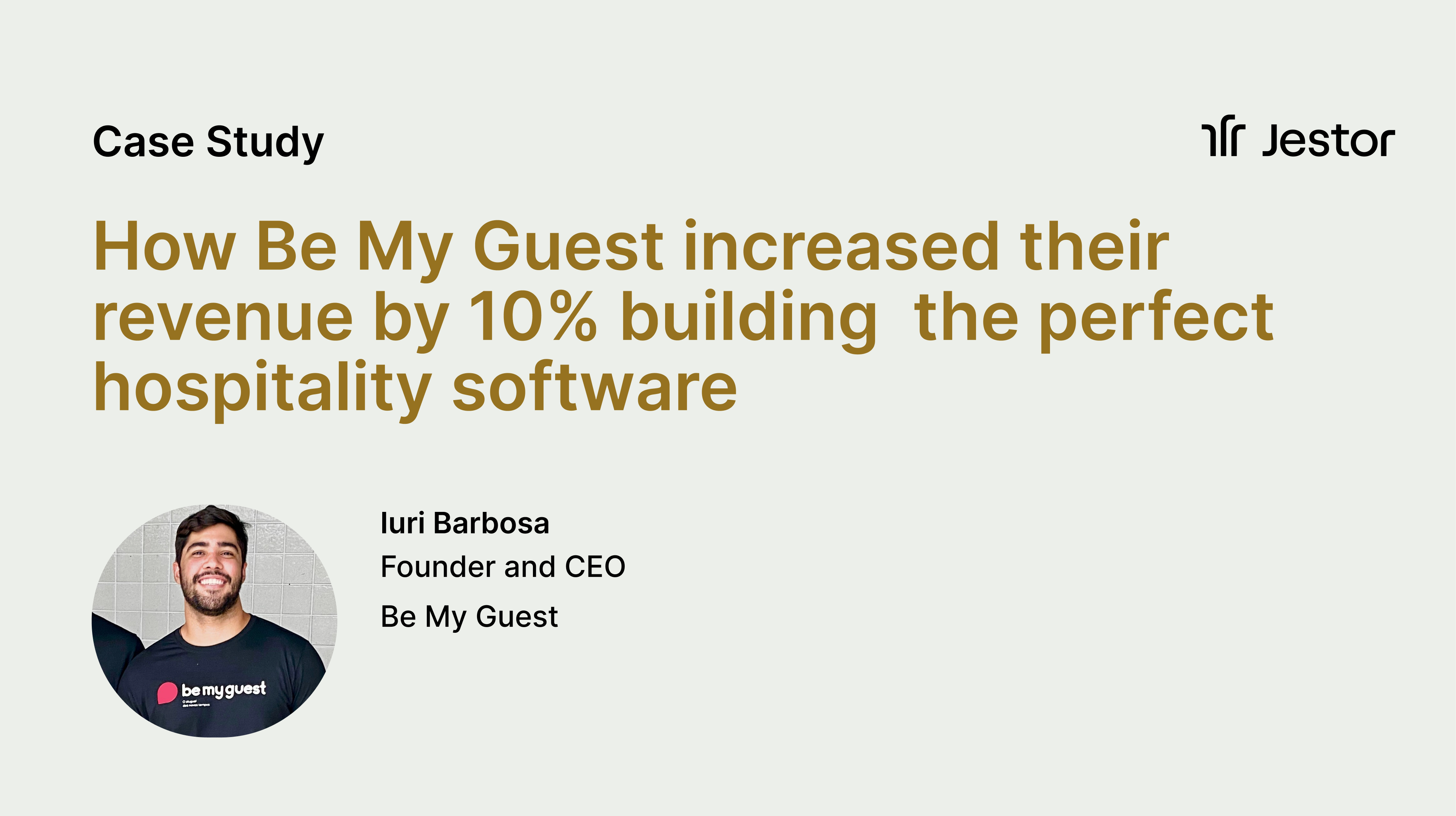 Every proptech runs things their own way. While a PMS can handle bookings and transactions, only a fully customizable platform like Jestor could fit Be My Guest’s operations to a tee.

Source of income: newfound efficiency allowed Be My Guest to offer last minute bookings, a brand new product that has lifted by 10% their total revenue of their reservations.

Time saved: about 15h/week is saved by using Jestor to automate internal processes.

Immediate indicators: key performance indicators are automatically displayed and take no time at all to be calculated.

About Be My Guest

Be My Guest is a proptech startup in the hospitality business. They maximize returns on their clients’ properties, providing maintenance and facilitating bookings for a hassle-free way of generating income from idle houses and apartments.

From start to finish

Be My Guest faced an issue all too common for proptechs: they hadn’t found software that could run their operations end-to-end. While PMSs are usually focused on handling the guest-facing aspect of the industry (that is, booking platforms and financial transactions), they usually don’t provide much regarding the operational side of the business. They kickstart operations, but don’t really follow through with it.

That’s because hospitality is a tricky business: internal processes, such as laundry, maintenance, and housekeeping, can vary wildly from company to company, depending on a number of things ranging from region to type of property. As such, it’s very common for operations to run on a combination of spreadsheets and text messages, relying more on experience and managerial supervision than proper technology.

Be My Guest, however, wasn’t satisfied with this. Being a tech-oriented startup, they felt there should be a better way to run things than doing a series of manual tasks and copying data when a new reservation came in. A possible solution would be creating their own internal software from scratch, but that’s usually a costly and slow endeavor.

The other solution they found was using a no-code tool to accelerate the process of transposing their expertise and industry knowledge into a tangible, customized tool. They knew they would need a combination of apps, automations, and an integration with the PMS they were currently using: three aspects Jestor fulfilled better than they could imagine.

”I’m not a developer, but I know logic and processes. Jestor allows me to create what I design with no code. The times I have ventured into low code have also helped me understand the technical aspect of processes better, which in turn leads to better projects.”

Iuri Barbosa
Founder and CEO at Be My Guest.

The first thing Be My Guest did was integrating their PMS to Jestor. This was accomplished with a single webhook that received the information from the PMS and performed different actions depending on the type of data it was receiving. For example, when a reservation was created in the PMS, this created a record in a kanban inside Jestor so Be My Guest’s team could follow up with tasks such as getting in touch with the guest or inspecting the rented property.

This alone was already a huge gain to their daily routine. There was no need to access the PMS’s platform and extract data anymore: everything was already being automatically fed into their operational pipeline.

Better than that, however, was the fact that having all this information inside Jestor allowed them to automate and standardize the processes they were already running.

Typing texts and emails
Processes demanded a lot of time with communication as they usually involved third parties (such as property owners, guests, or suppliers). Team members could lose hours daily sending messages.

Low visibility
Because processes were run manually, information had to either be reported or fetched. This meant the team had low visibility regarding incoming problems, and had difficulty planning much ahead.


Offline operations
A lot of operational tasks were done mainly offline, with little information being recorded for future use. As such, there was also no automatic way of finishing a process and starting the next one.

Automatic messages
Standardized processes have automations and buttons to send template messages through a series of different channels. Time spent relaying information now is kept to a minimum.


Eagle eye vision Dashboards, visual indicators, recurring automations, and custom notifications let the team have instant access to history, current events, and future tasks. Switching between a single record and an overview of the process is never more than a few clicks away.

Fully integrated field opsA combination of forms, mobile apps, and integrations ensure everything is being recorded into Jestor, where events will be monitored and acted upon. Because everything is inside the platform, processes can be chain linked together in fully automated arrangements, closing the gap between field and office.

TLDR: Be My Guest created a perfect mirror of their physical operation inside Jestor, organizing and automating different processes in a way no standard software would be able to support.

“Lack of proper software led to recurring headaches. It was not uncommon for us to have inventory counting problems, and other similar issues. With Jestor, we know we have the correct numbers and don’t get short handed.”

Iuri Barbosa
Founder at Be My Guest.

With the time saved by using Jestor, Be My Guest is now able to build better processes not only in terms of speed, but that are safer to operate and less prone to human error.

One awesome example is their laundry process. When inspecting a room, Be My Guest’s team can use an order generator component (which functions similarly to a shopping cart) to create an order with all the items to be laundered. This order is then monitored in a dashboard, where it’ll be on display until the items are returned: where the team will compare the number of items returned to the number of items sent.

With this extremely user-friendly process, they are able to provide not only a delightful and effortless way for their field ops team to run their processes, but are able to tighten and refine them into a safer, more reliable version.

By using Jestor, they are able to not only transpose their physical operations into software, but iterate and improve them continuously.

When Be My Guest decided to run all their processes in Jestor, they really meant it.

Apps show maintenance orders in a list. Every request or complaint is registered into the platform and can be used to create actionable tasks. Guests can fill out forms when checking into a room, and this information will be connected to the reservation automatically.

Here are some of the processes they’re currently running:

New reservations are sent via webhook by the PMS and created in a kanban inside Jestor. Records are organized in apps by check-in date, and there are a series of onboarding routines run according to how near the deadline is. Buttons help previously manual tasks be entirely done with just a single click.

Besides the PMS, Be My Guest integrates Jestor with other useful software. For example, they use the form platform Tally to create beautiful forms to collect information from their guests, and this goes directly into Jestor, automatically connecting to relevant data and kickstarting processes.

Be My Guest uses an app with the order generator block to create orders that move laundry and other items automatically. They can then follow up on this order to guarantee no item goes missing, with a secondary process where they compare received items against sent items.

Dedicated apps show the cleaning staff which properties they are scheduled to clean or inspect. They can open those scheduled records to fill out a form that guides them through the process, and register the information in case they need it in the future.

Guests and the internal staff can create requests regarding maintenance and other issues, which are then categorized and prioritized so they can be quickly acted upon. Every step of the process is recorded inside the request, including evidence–which can be useful when a claim is false or wrong, and later disputed.

For Be My Guest, their Jestor account truly became their very own ecosystem, a virtual workspace containing every single piece of data or feature that they need to keep things running as smoothly as possible.

As the company grows, the ability to change and adapt this workspace will be vital to keeping chaos at bay–one of the many challenges of scaling up. Fortunately, they already found the perfect tool for this.